Finding out the story of our ancestors, who they were and something of their personal history, involves a combination of genealogy research techniques, serendipity, and the science of genetics. Serendipity, the accidental discovery of something fortunate, is unplanned and cannot be anticipated. While it is always nice to have, serendipity cannot be your entire family history strategy.

This leaves us with family stories, census data and other sources of records for our ancestors. Sometimes these contradict one another. Should that happen, there are ways to evaluate and settle on the most likely answer. However, the final way to compare family history to current reality is DNA. Should DNA results contradict the family history, no matter how well researched, the DNA (as measured in a member of the family line being studied) is incontrovertible!

This is best understood by examples. I am going to use a fictitious Taylor ancestor and demonstrate what various DNA results will tell us. Let us begin with an imaginary ancestor, John Q. Taylor, born in 1824 in Belmont, Ohio, USA. As were all years, 1824 has its distinctions, on November 5th – Rensselaer Polytechnic Institute (the first technological university in the English-speaking world) was founded in Troy, New York, the Florida State capital moved to Tallahassee, where it remains, and Beethoven’s 9th Symphony premiered on May 7th. This ancestor (for our example we will assume he is our earliest known ancestor) grew up, married and produced four sons: Abe Taylor, Bryon Taylor, Charlie Taylor and Daniel Taylor. All four sons were born in Ohio in the period 1845-1860 and you have records of them and their marriages. Each produced at least one son who was named after him, Abe Taylor II, Byron Taylor II and so forth.

Skip ahead to the current day. You are Daniel Taylor IV born in 1950 in Louisville, Kentucky. (Or his close female kin.) You have records and a pedigree showing your descent from your great-great-grandfather, John Q. Taylor. You submit a sample and join the Taylor project.

Luckily, it turns out that there are existing samples in the Taylor project for three others of your third cousins, direct descendants of Abe Taylor, Byron Taylor and Charlie Taylor. Let us look at what the results might mean. 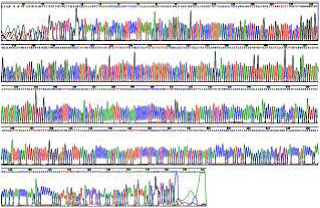 In our first case, let us assume each of these Taylor cousins does a 12 marker y-DNA test. In our example, all four match. Does this prove the family history? No! (Nor does it disprove the family history.) All a 12-marker match tells us is that these four men share a common ancestor sometime before 1200 AD, which predates the use of surnames. It does not tell us that they are third cousins, or that they are not.

What if you each tested 25 markers and had a perfect match? A perfect 25/25: The chances are 90% that your most recent common ancestor is within the past 28 generations, roughly since 1300 AD.

What if you tested 37 markers and had a perfect match? A perfect 37/37: The chances are 90% that your family lines are connected within 19 generations, most likely since 1530 AD.

These, however, are the easy cases.

What if, of the four descendants of John Q. Taylor in the Taylor project, yourself and three different third cousins, representing three different lines, three of you match 67-67 and one matches 65/67? While it is unlikely that there would be two random mutations in the same line over so few transmission events , it is within possibility that the four lines are connected as the paper trail indicates.

But let’s make this more complex. Three lines connect at 67/67, and the fourth line, which has an equally compelling paper trail, connects at 62/67. From mathematics, we know that the fourth line, with only a 62/67 connection, is not a recent cousin of the other three lines. Their genetic connection is before surnames came into common use in the English speaking world.

How do you proceed to understand more about these lines? There are several ways to proceed. One is to compare the 67 marker matches to all surnames at the Family Tree DNA project. If that line ends up having 15 perfect matches to individuals with the surname Miller, then there is a likelihood that somewhere between 1824 and 1950 either an adoption or a “non-paternal event” occurred that introduced the Miller genes into the Taylor family.

In addition to following the genetic science, you also want to further explore the family history. Was there a time that rumors spread about an affair? When husband and wife were separated? Follow that thread to find out more…

Lalia Wilson for the Taylor DNA Project
Posted by WiseLalia at 10:55 AM 2 comments: