Jeff Taylor is a member of the Taylor project.  He is part of family group 15.  Here is his story:

"Prior to submitting my DNA I was at a dead end. The only information regarding my most distant Taylor ancestor was found in the publication 'History of Bourbon, Scott, Harrison and Nicholas Counties, Kentucky, ed. by William Henry Perrin, O. L. Baskin & Co., Chicago, 1882. p. 693.'  [The picture below is a modern photo of the Nicholas County jail and jailer's residence, built from 1820-23.  This is one of the historical sites of Nicholas County.]

"...His father, Jacob Taylor, came to Kentucky from Ohio, and died in Harrison County in 1818, aged about thirty-five;..."


"Based on this information the only clue I had was that my 3g-grandfather Jacob Taylor was born about 1783, had moved to Kentucky from Ohio, and died in 1818 in Harrison County, Kentucky, "about" 35 years of age.


"My 67 marker test resulted in one match with a genetic distance of -3. I contacted Mark Edwards and he kindly provided me with the name of Clara Sesler Genther who had authored a book entitled, "Ancestors and descendants of Taylor and Hager families of Madison and Union Counties, Ohio ..." Upon contacting Mrs. Genther I learned she still had a few copies available and ordered a copy from her. Interestingly, on page 42 there was a single notation for Jacob Taylor which stated "6. Jacob - came to Ohio but returned to Kentucky?" Based on the ages of his brothers Jacob would have been born about 1780.

"Based on DNA and the paper trail it appears that DNA has helped me make a connection to my Taylor family based on two sentences about Jacob Taylor which were published 100 years apart; and, thanks to Mrs. Genther's research, helped me trace my Taylor ancestry to Christopher Taylor who died in 1644 near Skipton, Yorkshire, England." 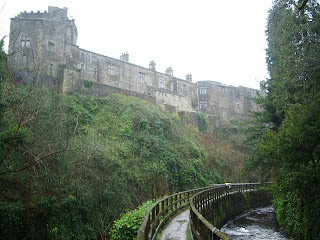 [Wikipedia states: The small town of Skipton in North Yorkshire, England has been around as far back as 1085, is listed in the Domesday Book, and has roles in history during the English Civil War and as the site of a prisoner-of-war camp during both World War I and World War II.  During the English Civil War, a Royalist garrison was situated at Skipton Castle, under the command of Sir John Mallory. It was the last remaining Royalist stronghold in North England until its honourable surrender on 20 December 1645 after a three-year siege.  Lalia's note: Christopher Taylor died a year before the end of the English Civil War.]

Jeff Taylor
Posted by WiseLalia at 11:12 AM No comments: